A Tale of Two: The Red Wine and Pear Sorbet….

…Many years later, as (s)he faced the firing squad, (elisabeth) Colonial Aureliano Buendia was to remember that distant afternoon when (her) his father took him to discover ice (cream)…

So, if you’ve read One Hundred Years of Solitude by Gabriel Garcia Marquez, you may have noticed some slight changes to the above quotation. However, it was the first thing that popped into my mind when thinking about making my own sorbet and ice cream. The feeling of that total mystery of ice, or in this case, ice cream, even when it is sitting right in front of you. It has always seemed like a far off, distant sort of dream, balancing the flavors, getting the texture just right. Of course, first things first, you need a strong arm and plenty of time or an ice cream maker, the latter of which I did not possess until last week (Thanks, mom!).

And after a weekend of ice cream making, well, I  can assuredly say that only the tip of the ice (cream) berg has been revealed. 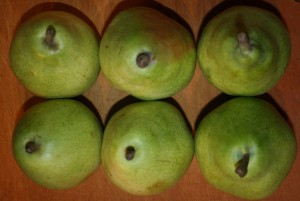 I saw this recipe for Red Wine and Pear sorbet in the New York Times online, and even before I had or knew I would have an ice cream maker, I posted on facebook that this would be my first recipe on that far off, eventual day. And through a lucky twist of fate, here I am, one week later and in possession of one red and beautiful ice cream maker (and five kinds of ice cream in my freezer)!

Let me also point out that this sorbet is packed with phytonutrients, and SO, it’s sort of like taking your vitamins….

First, you’ll want to prep the pears. I just used a peeler, slicing the top and bottom parts of the pears as close to the edge as possible.

The peels make great snacks for pups if you have them, or yourself!

I don’t know, maybe it’s just me, but I totally have this thing about creating stonehenge out of random, stonehengy shaped things…. 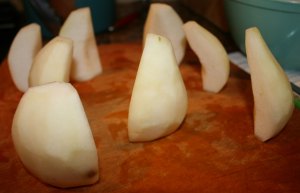 So, now that we have THAT out of the way, we can continue to the next step….which is basically to measure out the other stuff, but not the LEMON juice or the pepper, we’re saving that for later… (red wine, water, sugar, vanilla, cinnamon stick) and put it all into a medium pot on the stove.

Bring to a boil, then reduce to a simmer, uncovered until the pears are soft and translucent. The recipe from NYT says it will take about 30 minutes, but I guess our pears were a little on the harder side, because it took about 45 minutes. But not to worry, I think the greater importance is getting the pears soft and wine infused over a particular amount of time. I also sort of tended to the pears, turning them over and putting the ones on top underneath after a bit. Believe me, you’ll WANT to be near the pears, because they give off a delightful scent that is reminiscent of mulled wine and holidays.

When the pears are ready, they will have a beautiful deep reddish purple tint. Remove them carefully, especially if they are soft!, and place into a bowl to cool a bit.

Toss your pinch of pepper into the syrup remaining in the pot and remove the cinnamon stick. You want this syrup to be thin, but still syrupy. If you tip your pot sideways, then back down, you want a thin layer of the liquid to remain on the side. The syrup may already be about that consistency, in which case you don’t have to cook it further. I would say I continued to reduce for a few more minutes after removing the pears.

Then you’ll want to blend the pears. I used the food processor, because we all know my burny history with hot things in blenders. Blend at your own risk, and if the pears aren’t pretty darn cool by the time you are putting them in the blender, SMALL BATCHES! Aye!

Blend, blend, blend, until the pears get nice and smooth, then slowly add your syrup. Next, add the lemon juice, and blend some mo.’

Transfer the mixture into a bowl, or in my case a REALLY large measuring cup. This makes it really easy to pour into your ice cream maker. Place whatever you plan to store this in into the freezer so it gets nice and cold.

When you are ready to make the magic happen, and not a minute before, get out your frozen ice cream making component and get ready to pour! You do want to have given your mixture plenty of time to cool, because the cooler it is, the more efficient your ice cream maker can be!

At first, it will have the consistency of a thick soup. But slowly, over the next 25-30 minutes of work by your little ice cream maker,

And now it’s time to transfer to your chilled container, where you can make it look pretty, like the ice cream containers inside the glass at ice cream shops:

Just use the back of a spoon, and pretend you are icing a cake..

And now you’ve done it! This is a great little ice cream maker, that isn’t too expensive. And furthermore, you will NEVER be held back by the limited number of ‘regular’ flavors of ice cream and sorbet at the store! You can make any flavor your little heart desires..which reminds me, check back soon for the recipes for basil, pistachio, classic vanilla bean aaannnndd lavender!!

For now, hope you enjoy! Now it’s back to the ice cream making cave!!!

This entry was posted in Desserts, Ice Creams and Sorbets, recipes. Bookmark the permalink.

1 Response to A Tale of Two: The Red Wine and Pear Sorbet….