You Need to know about this No-Knead Bread! 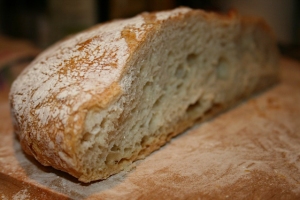 Ok, so I posted a picture on my facebook page a few weeks ago, and figured it was time to get it up on the blog. The original recipe can be found here. It is one of the most fun bread-making experiences I have ever had. I have had a roller-coaster type ride with bread recipes in the past. Frequently, I experience brick-loaves…you know, the ones that are more effective as self-defense weapons than something to actually eat? I tried and tried over and again, only to have to deduce that my hands held some mysterious yeast-killing microbial combo that destroyed my loaves barely before they started to become. This is literally what I thought for months. Then I tried THIS recipe. And now I feel like a bread-baking superstar!! Because even if you futz around and don’t get everything perfect – you still end up with a gorgeous and delicious loaf that you want to carry around with you to show off. But that’s only if you and anyone nearby doesn’t consume it immediately…

1/4 ounce of instant, or bread, yeast

Oil for the bowl during rising

You also have the choice of dusting the outside of the loaf with flour, cornmeal, or wheat bran. So whichever you have, or feel like getting! We’ve just used the flour.

The other great thing about this recipe is just how little work it requires! No-knead! No mixer! No bread machine! Just a bowl, a pot, a couple cotton towels and about 18 hours of rising. That’s the part where you let those little yeasties get to work!

So, first you want to combine the flour, yeast and salt in a large bowl. Add your water and stir with a wooden spoon until mixed together. You want the dough shaggy but not too wet. I’ll give you an example of too wet:

if your dough looks like this, you maaaaaay want to add a sprinkling of flour!

But the great thing is, that even this dough turned out beautiful and yummy! Like I said, you just can’t go wrong with this recipe!

Next, cover the bowl with plastic wrap and let it sit for about 12, but better if its 18, hours in a warm kitchen. I frequently turn on the oven to about 200-250 degrees for a while, placing the bowl on top of the stove. If you don’t have raised burners I would probably put a pan in between the bowl and the surface, just so it doesn’t get TOO warm at the bottom of the bowl. And obviously you should NOT leave it on for 12-18 hours! If you have a cold kitchen, just give it a few boosts, just to be nice. 🙂

When your dough’s surface has little bubbles all across it, it is considered ready, but you may get these before you finish letting it rise. But go ahead and let it sit a little longer, you won’t regret it! The only thing you don’t want to happen is a crust on top of the shaggy dough. I haven’t had this happen, but it doesn’t hurt to give the dough a glance now and then, just so it knows you love it. If it’s dry, I would quickly give it a spritz of water and a stir. Make sure your plastic wrap is sealed, then back to sitting!

When you are ready, bubbled surface, 12-18 hours later, lightly flour a smooth surface. Put the dough on it and fold it over on itself a couple times, loosely.

Drape with plastic wrap and let rest for 15 minutes. In the meantime, grab a cotton tea towel or towel, but not terry cloth. The dough is sort of light and sticky, and I think this would prove problematic to use a heavily textured cloth, as it would most likely stick to it. Generously flour, wheat bran or cornmeal, the towel. You will be placing the dough, once made into a round, onto this towel.

Shape the dough into a ball, using as little extra flour as possible.

And place, seam side down, onto your prepared towel. Dust a little more flour, wheat bran or cornmeal, on top of the loaf. Drape another cotton towel on top and let sit for another 2 hours. The dough is ready when it has more than doubled in size and does not spring back quickly when poked.

About 1 and 1/2 hours into the last rest, heat your oven to 450 degrees. Place a 6 to 8 quart covered pot either cast iron, enamel, pyrex, ceramic, or stainless steel, we use a stainless steel pot, into the pre-heating oven. You will want to have a lid for it. When your dough has reached the desired size, CAREFULLY pull out your pot, AND REMEMBER THAT ITS HOT!! I have made the mistake of absentmindedly going to pick up this pot with its handle..and I will tell you, it doesn’t feel very good! So don’t do it!! But remove the lid, and pick up your loaf, with one hand underneath. You are just going to turn that baby over and drop it like it’s hot, into that pot. Don’t worry about what it looks like, just give the pot a shake – WITH A HOT PAD!! Replace the lid and move it into the oven and bake for 30 minutes. 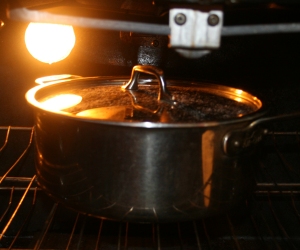 Remove lid and continue to back for an additional 15 to 30 minutes.

This is where you are getting your nicely browned crust, so it’s sort of a matter of personal taste how long you leave it in! Just give it a check every five minutes or so. You can gauge what’s goin’ on. But it will look something like this when done:

Isn’t that crust a beaut?

Take the loaf out of the oven, turn it onto a rack to cool. Then happy eats! Super easy, super cheap, and not too much hands on. OH, and it ALWAYS turns out good, which is something I really look for in a recipe..well, they ALL are what I look for. So I’d say this is a five star recipe! 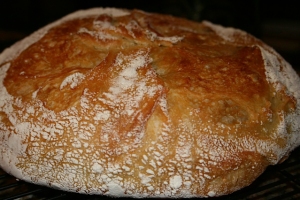 This entry was posted in Bread, grains, recipes. Bookmark the permalink.