Beans of every color!

Let me start with a quick revision of the popular bean-song: (feel free to sing along!)

“Beans, beans the magical fruit, if you soak them properly, then you won’t toot! But your body will thank you for how you feel, so eat your beans at every meal!!”

Ok, so you don’t have to REALLY eat your beans for every meal. But we are. At least for this month. It is our attempt at frugality aimed at saving some money to send to the relief effort in Japan. For us, the food budget is a place we can cut down in order to put some aside. Not to mention the nutritional benefits from eating beans, when properly soaked!

This first recipe is beyond easy and literally has four or five ingredients, depending on how you choose to approach it.

Bob’s Red Mill 13-bean soup (that’s right 13 kinds of beans and lentils! YES!) hopefully you can find this in the bulk section, but they also come in individual packets.

Bacon or a ham-hock (which they don’t sell at our local grocery, hence the bacon)

One or two of the following greens: collards, kale or cabbage

Ok, ok, with the last three, I think that brings the total # of ingredients to five! But hey, math was never my strong suit.

Next, you will want to throw 2 cups of the bean/lentil mix into a medium or large mixing bowl and fill with a generous amount of water. 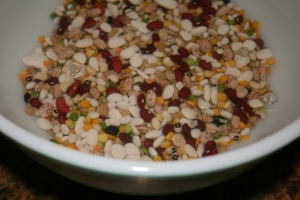 The soaking step is definitely an important one – not only does it reduce cooking time significantly, but it helps to remove the complex sugars (aka oligosaccharides) from the beans outer coating. These pesky sugars are what put the ‘toot’ in the magical bean song, if you know what I mean. Also, reducing the cooking time helps the beans retain their greatest percentage of nutritional benefit!

Put the beans off to the side, where they won’t get in the way and let them soak overnight.

When it is time to cook ’em up, throw 5 or 6 slices of bacon into your soup pot and render those babies. I’ve tried this without rendering, and it’s just not as good. If you are using the hock, just toss ‘er in right before you add the beans.

Take a moment to give the beans a good rinse. Unless you like eating dirt and god knows what else was on those shells….After your bacon is looking a little browned around the edges and some of its fat is now in the pan – toss in the beans and give them a mix around in those delicious bacon juices.

Add 2 and a half quarts – or six cups – of water and bring everything to a boil. Reduce to a simmer and let cook for a couple hours. See, I TOLD you it was easy! You can check the beans, if you aren’t sure about their doneness, by taking one of the biggest ones out and slicing it in half – you want no whitish chalkiness…

I LOVE putting some kind of sauteed greens on top of this soup. You will be surprised how flavorful all those beans, and ahem, bacon, tastes alone, but a nice topping of greens seems to balance it out just right.

This last time I used a combo of green cabbage and lacianato Kale – the dark, flatter leaves – first I remove the spines, then I chop them into thin strips (thinn-ISH, remember who you are talking to here) but roughly bite sized, since this makes it easier to eat. And I am all about that. I generally prefer collared greens, but they were out at the grocery store (what kind of place is this??). SO I improvised. 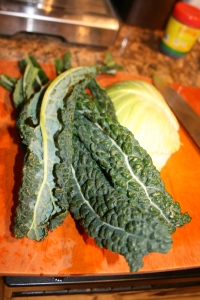 Heat up a medium sized pan – preferably stainless steel – with a layer of olive oil on the bottom. Medium heat should do it, you want to hear a nice sizzle when you drop them in.

Toss the chopped greens into the pan once the oil is hot, sprinkle salt over the top and start mixing them around. 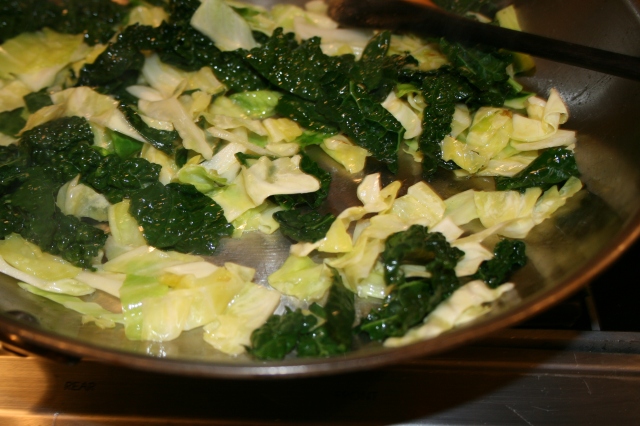 I usually only give them a minute or two, just softened but not over cooked. I like my greens with a little crunch left in them.

At this point, you can probably get your bowls ready, toss the bacon strips into the garbage (I know, I know, this is the ONLY painful part about this process…) and get ready for eatin’ time.

Toss a nice pile of those greens on top and you are ready for a cost effective and nutritionally bursting meal. This will leave you feeling truly satisfied, with yourself and your body will say ‘Thanks!’ And not ‘Toot!’

Place in tupperware containers. You might need a couple because this makes enough soup to last a couple days. And now you have made many meals for very little money and effort! Bon appetit!

This entry was posted in Beans, Main Dishes, recipes, Soups. Bookmark the permalink.