The “No Turning Back” Brown Rice…

I say this because, well, we rarely make rice any other way..it’s just too easy…and too yummy to be inspired to do it other ways. And we even own a rice maker!!

MMmm tiny bits of toasted nuts and browned sweet onion..does it get any better?

This is one of those recipes of mystical origin. I believe it may have started with my grandmother on my dad’s side. She was fluent in Spanish and traveled to Spain and Mexico a lot. This recipe is sort of like the beginning of something called “Spanish” or “Mexican” rice, but you don’t add the tomatoes or cumin. So that may have been the original inspiration.

My dad just remembers the rice always being cooked this way. My grandmother also had a wonderful Spanish cook later on named Pepita. My dad talks about how they used to chat and switch between Spanish and English with lightening speed. I wish I could have been around THAT more!

1 whole or 1 half of a yellow or red onion

Most of the recipes I use have a little leeway and this one is no exception. Sometimes when we make it we use a whole sweet onion, other times just a half and sometimes a purple one just to mix it up. I haven’t tried with a white onion, but it would probably work, too. Traditionally, though, we use a sweet onion. They are just so darn good browned up!

So give your whole or half an onion a nice “rough” chop – or fine if that’s how you like it!

Heat up some olive oil in a pot – if you have a ceramic one all the better for browning the onion, but metal works too! Non-stick won’t really get you there. You’ll have transparent onion bits, but maybe not as browned. You may also have to add a bit more olive oil if the onions start to look a little dry. Just keep an eye and trust your instincts! 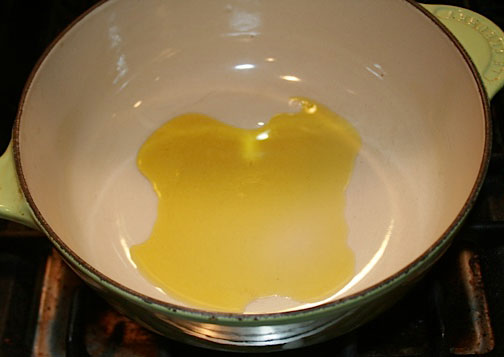 This is our FAVORITE pot. Can’t go wrong with a ceramic pot.

Add your chopped onions, and generously salt them. The salt helps to release the moisture in the onions and boosts their flavor. Sautee your onions until they turn yellow. Then let them get a little brown.

You won’t regret waiting for a couple browned bits!

Next, you want to add your rice and mix it around in the pot with the onions and let the rice kernels get coated in olive oil. After about a minute of mixing around, add your two cups of chicken stock.

Bring the mixture to a boil, then reduce to a simmer.

Put the lid on and let simmer for 45 minutes to an hour. Keep an eye on it towards the end.

Starting to get there!

During this time, if you want to add nuts, you’ll want to get them toasted or ready in whatever way you choose. In the picture at the top, I toasted up some pine nuts (soooo flavorful and nutty!) and some almond slices in a small pan on the stove. Once they are browned, set aside to mix in at the end.

When your rice is ready, give it a few fluffs with a fork and toss in your nuts or other additions, perhaps yellow raisens, if you are wanting a little brighter sweetness in there. Mix ’em up and you are ready to go!

This entry was posted in grains, recipes, Side dishes. Bookmark the permalink.